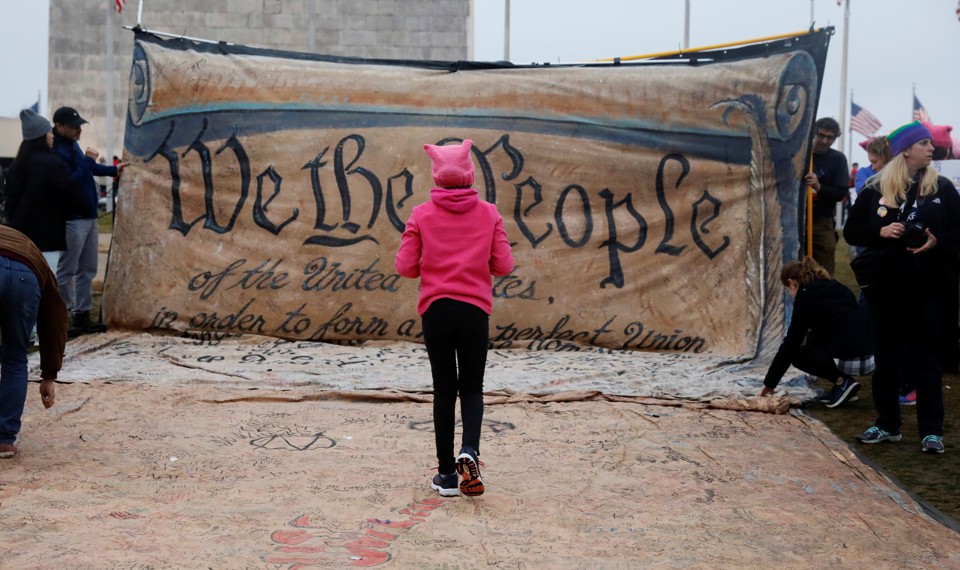 A woman stands in front of a sign at the Woman’s March in Washington DC in 2017 (Lucas Jackson/Reuters).

A common reaction from someone in jeopardy, whether legal or professional, is to loudly exclaim ‘I have rights!’

As an American citizen, to a certain extent, that statement is correct. Should a person be interrogated by the police, the US Constitution allows them to stay silent. If the government threatens to take someone’s property, they are entitled to notice and an opportunity to contest the confiscation.

These protections, however, extend only to actions concerning the government. In private sector disputes, unfortunately, those who find themselves in trouble are often at the mercy of company policy or contract terms.

Accordingly, use of the Due Process Clause (DPC) of the US Constitution to resolve, or defend against, #MeToo-related allegations in the private sector is an improper method for settling workplace complaints.

But to understand this error, it is essential to know the origin and purpose of DPC in the American legal system.

A common cause for concern in the Constitutional Convention of 1787 was tyranny. Having just defeated a man they considered a living tyrant in King George III, the Founders were acutely aware of the dangers of an oppressive government.

To that point, the Founders created a system that limited government power. Their goal was to restrain the government who, with near-unlimited resources, could quickly destroy the livelihood any private citizen.

The Founders heavily debated the powers of government in 1787.

The Bill of Rights helped achieve the Founder’s goal by establishing a set of protections from the government. With regard to DPC, the Fifth and Fourteenth Amendments provide that no person shall be deprived of “life, liberty or property, without due process of law.”

This means that before the government ends a person’s life, jails him or takes his property, it must offer notice of the charges and provide an opportunity to be heard.

But this principle only concerns government deprivation of individual rights. As a legal matter, it does not apply to private businesses, leaving most American workers uncovered by its protections.

Despite the clear limitation to government-related disputes, DPC is commonly invoked in private sector misconduct allegations.

But when misapplied to private disputes, the force and efficacy of DPC is missed, leaving neither party closer to reconciliation.

Instead, the responsive nature of the free market can counter workplace abuse, establish procedural norms and protect the interests of the concerned parties.

For combating workplace abuse, consider this example: An owner of a grocery store- in a town with three other similar entities- openly refuses to serve minority customers. In today’s economy, that grocer would not survive. The reason is that in an age where discrimination is socially unacceptable, consumers in that town can punish the owner by simply shopping elsewhere. Private businesses will need to establish safe environments to compete for employees.

The same can be true for sexual abuse and discrimination. As American society becomes acutely aware of sexual misconduct in the workplace, the social acceptability of such behavior will continue to decline, eventually falling into a state of universal disapproval.

Similar to the failing grocer example, prospective employees in the free market will respond by rejecting abusive employers in favor of companies who offer safe work environments.

The market can also compel companies to protect disputing employees. With the recent avalanche of sexual misconduct accusations, it is imperative that employers develop fair investigative and adjudicative systems to address complaints.

Should a private company fail to do so, it becomes a less attractive destination for employees. This is because workers will seek employers with conflict resolution procedures that offer rigorous investigations and equitable decisions.

Without a reputable process in place, employers risk depressed human capital and troubled recruitment efforts. To survive, these employers would be forced to develop systems that produce stability and protect both sides of the controversy.

And so the call for DPC in the private sector should give way to a more appropriate and effective method of resolution. The #MeToo movement established that workplace abuse is at a dead end, but the power of the free market is a better tool for creating safe environments for all in the modern workplace.