49ers Safety Eric Reid with Wide Receiver Marquise Goodwin before their game against the Giants. (NBCSports.com).

See this article published in The Good Men Project

Ideological polarization has reached most facets of our daily lives, with political discourse and ethical questions often turning on partisan loyalty, and discussions on race pivoting on immutable characteristics like identity.

Even ideals such as personal efficacy and faith produce division and misunderstanding among Americans today.

But sometimes these societal conflicts are mitigated in unsuspecting arenas, one such place being the football field.

There is a common refrain among football coaches that lessons learned on the field far outweigh those propounded in the classroom. These lessons include the benefits of developing a strong work-ethic, physical fitness and mental fortitude.

The most important lesson, however, is the sacrifice of personal interest for the betterment of the team.

Amid our divisive political and cultural climate, a recent Sunday afternoon game between the San Francisco 49ers and New York Giants embodied the value of self-sacrifice and illuminated the unifying powers of faith and secular humanity.

There was little anticipation leading up to the game. The 49ers had yet to win, standing at the bottom of the league at 0-9. The Giants were struggling too, with a record of 1-8 and millions of disappointed fans who had expected them to make a Super Bowl run.

Two events that day, however, turned the meaningless game into a lesson on selflessness and devotion.

Early Sunday morning on November 12th, 49ers Wide Receiver Marquise Goodwin’s wife went into premature labor. The pregnancy was only 19 weeks along, and after complications the previous week, the baby was delivered stillborn.

The baby, named Marquise Jr., died at 3:52 a.m. The couple remained with their child for as long as possible, until finally saying goodbye. In a matter of hours, Goodwin needed to suit up for the game against the Giants. Initially, he planned to stay with his wife, but she had other ideas. 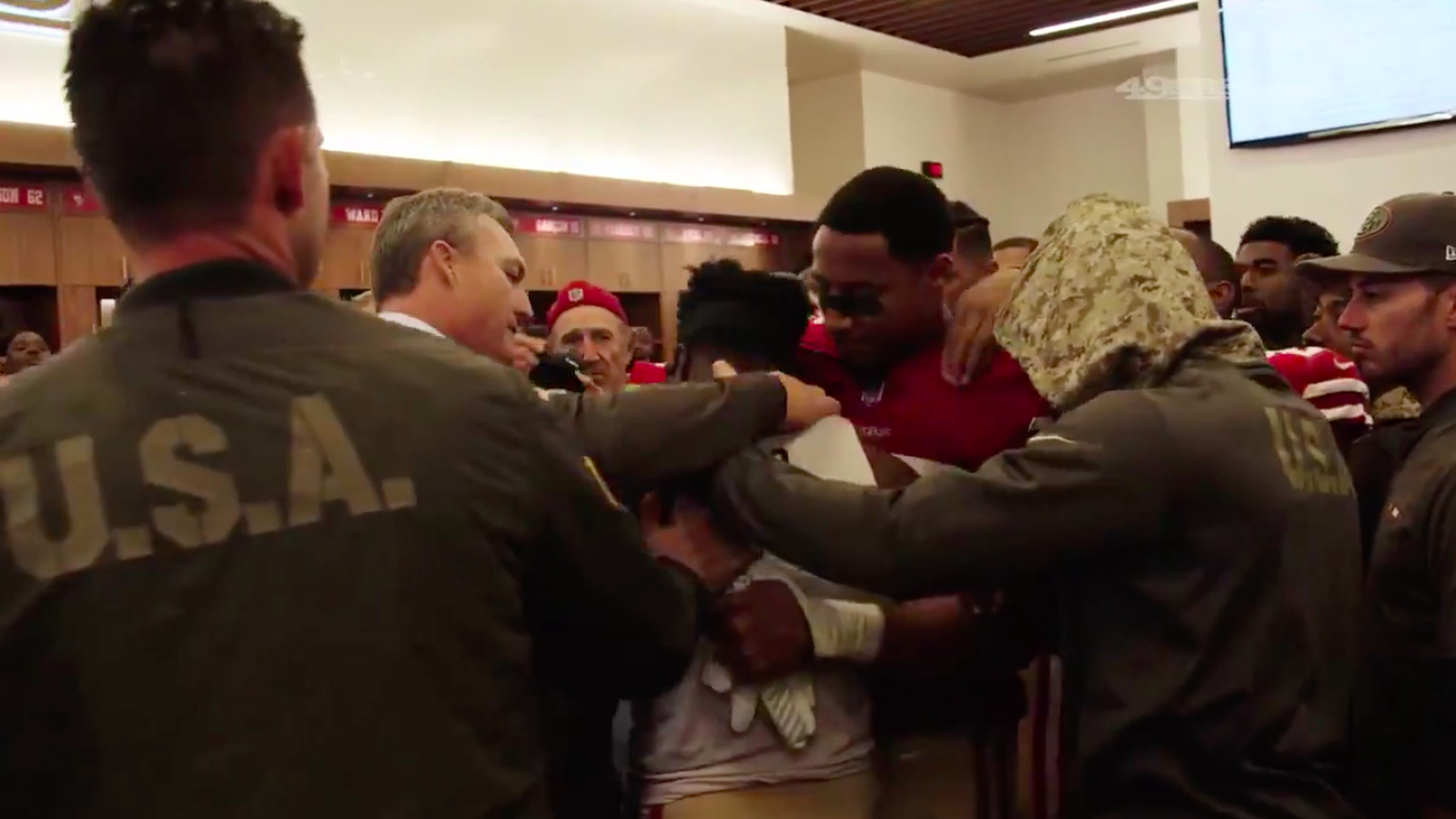 49ers Wide Receiver Marquise Goodwin (center) is comforted by teammates after their win over the Giants. (49ers.com)

“We had our baby boy, we spent time with him,” she said. “I’m explaining to him I want you to play in this game because I want your son to see you play.”

Not only was Goodwin in uniform for the 1:25pm game, he caught an 83-yard touchdown pass in the second quarter to give his team the lead. At that time, only a few teammates knew about his son’s death, and it wasn’t until after the game that he shared his tragedy with the entire team.

A deeply religious man, Goodwin used his faith in family and God to play for his son. Had he not showed up to the stadium that day, his absence would have gone unquestioned. But Goodwin’s faith carried him forward, and helped his teammates get their first win.

After the game, Goodwin was asked about his Instagram account motto, which reads ‘The reward lasts longer than the pain.’ Goodwin replied that it meant despite losing his son, he has faith that God has something bigger and better in store.

On his darkest day, faith gave Goodwin strength to set aside his own anguish, and instead tend to those who meant the most to him: his wife, departed son and his teammates.

Said differently, Goodwin’s faith compelled him to a state of selflessness.

Around the time that Goodwin was summoning the strength to play, 49ers Offensive Tackle Joe Staley was waking up in pain. Two weeks earlier, on October 29th, Staley suffered an orbital bone fracture during a game against the Philadelphia Eagles.

In laymen’s terms, Staley had a broken face. Upon impact, Staley’s eye socket had cracked, causing him to fall to the ground in pain. An injury of that kind can take weeks to heal, and cause symptoms like intense cheek pain when opening the mouth, facial numbness, swelling of the forehead and decreased or blurred vision.

Of course, these symptoms are magnified while playing football. Even more, they are excruciating for an Offensive Tackle, who makes head-to-head collisions on almost every play.

Much like Goodwin, had Staley elected to sit out the game, no one would have questioned his intentions or toughness.

Nonetheless, Staley decided to play. Not only did he suit up for the game, but Staley performed at a high level, providing excellent blocking for his quarterback and running backs.

“Not everybody sees what we see in the locker room,” Staley said after the game. “They don’t understand how close we are. No one has wavered. No one has ever pointed fingers. We’ve all just buckled down.”

On a day when he likely woke up in significant pain, and had every right to call in sick for the day, Staley showed up for work. He did so, undoubtedly, to fulfill a commitment to himself as a player.

More importantly, he played through pain for the benefit of his teammates.

In other words, Staley’s conduct was humane.

So, in an inconsequential game, one man took the field amidst unspeakable grief, and the other with a broken face. But despite their personal struggles, both men placed their obligations to others above their own interest and pain.

Their proclivity for personal sacrifice, however, manifested from distinct sources: pious devotion and secular humanity. But their actions achieved the same goal of selflessly supporting their teammates, in effort to ensure the greater good over personal preservation.

In short, they simultaneously practiced faith and humanism in the unlikeliest of arenas- the violent setting of an NFL game- and used their sense of conviction to lead their team to victory.

And so we are left with an invaluable lesson learned outside of the classroom- humans of all convictions are able to selflessly work for the common good, even in a divided land like the United States.

2 thoughts on “Post 37: Faith and Secular Humanity Meet on the Gridiron”